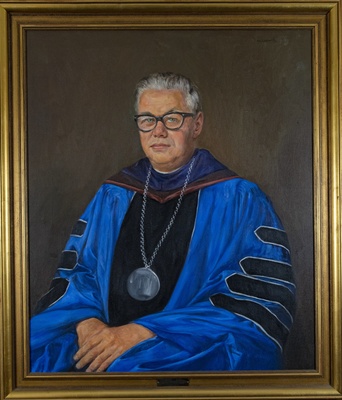 Portrait of Werner A. Baum, President of the University of Rhode Island from 1968 to 1973. The portrait hung in Green Hall on the URI Kingston campus until December 2021, and now resides in the University Libraries' Distinctive Collections.

Werner A. Baum had been the deputy administrator of the Environmental Science Services in the U. S. Department of Commerce before he was named as the University’s seventh president.

As at universities nationwide, President Baum faced student protests, outcomes of actions taken at Kent State, and war. During his tenure, URI Library holdings few by 52 percent, he outlined plans for an addition to the Library and the University Club was built.