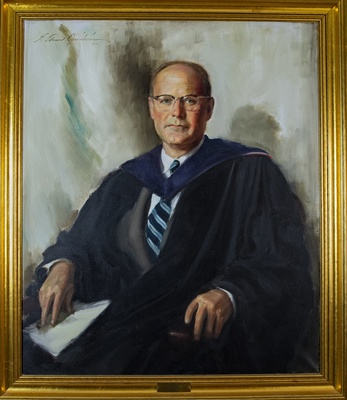 Portrait of Francis H. Horn, President of the University of Rhode Island from 1958 to 1967. The portrait hung in Green Hall on the URI Kingston campus until December 2021, and now resides in the University Libraries' Distinctive Collections.

The University’s sixth president, Francis “Fran” Horn led the University as it transitioned from a small ‘country’ college into what would become an internationally known university. When Horn came to campus in 1958, URI’s enrollment was under 3,000, and the school received little recognition outside the state. State leaders often dismissed the University as a “cow college.” Horn guided the campus through intense expansion in enrollment, faculty growth, programs, and buildings. He later served as president of the Commission on Independent Colleges and Universities of the State of New York, and vice president of New England College.

Before joining the University, Horn had served as distinguished professor of higher education at Southern Illinois University, as the president of Pratt Institute, and dean of the evening division at Johns Hopkins. President Horn received degrees in English from Dartmouth and the University of Virginia before receiving his Ph.D. in education from Yale University.