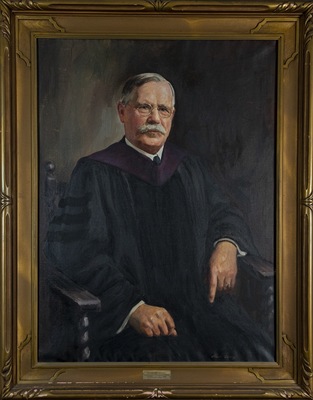 Portrait of Howard Edwards, President of the University of Rhode Island from 1906 to 1930. The portrait hung in Green Hall on the URI Kingston campus until December 2021, and now resides in the University Libraries' Distinctive Collections.

President Edwards fostered the URI’s growth from what once was a tiny agricultural school into a full-fledged college. For example, President Edwards opened the educational opportunities for women by first developing the College’s program in Home Economics, oversaw establishment of ROTC on campus, and he continually promoted advancements in curriculum and programs. Enrollment doubled during Edwards’ tenure and Ranger, Washburn, Bliss, Edwards, Rodman, and Lippitt Halls were built.

Prior to joining the college, President Edwards had been professor of English and modern languages at Michigan Agricultural College, and had taught at the University of Arkansas, and at an Academy in Tuscumbia, Alabama. Earlier he was a teacher and professor at the Bingham School in North Carolina and the Bethal Military Academy.

He received degrees at the Michigan State College, Brown University, and the University of Arkansas.