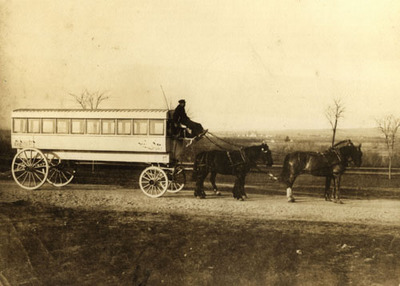 The campus bus, a large horse drawn wagon with plank seats, carried students from the train station up to Kingston Hill. The driver, William “Billy” Henry Potter began working for the school in 1896 as a beekeeper before becoming the bus driver. While transporting new students from the train station to the campus, Billy often regaled his young charges about the day he “whipped his horses into a lather” to get to the scene after hearing a “lad shout that the college was burning down.” Upon arriving at the burning College Hall, Billy learned that his brother, who was a janitor in College Hall, had been the last man out of the building. Billy retired in 1949 after 53 years of service to the College.