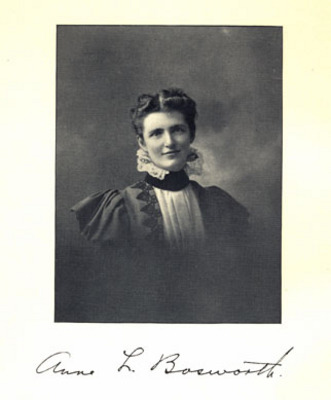 Anne Bosworth was born in Woonsocket, Rhode Island. She received her B.S. from Wellesley College in 1890 and was hired by Rhode Island State College (now URI) on March 23, 1892 for a one year appointment as math instructor. By April, she was appointed the college's first Professor of Mathematics and Physics. Bosworth attended the University of Chicago in the summers of 1894 and 1896 and received her Master's Degree in 1896. In 1899, she took a leave of absence to study at the Georg-August-Universität Göttingen in Germany from which she received her Ph.D. in 1900. Bosworth married Theodore Focke in 1901. Like so many women of her day, it appears that she left her position at the college to marry. President Washburn wrote in the 1902 Annual Report: "It is with regret that the institution loses Miss Bosworth from the faculty. Her conscientious work has been, from the beginning, highly appreciated by every member of the institution."