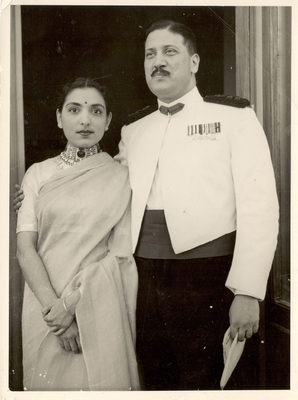 Nalin Kumar Dhirajlal Nanavati was born in Rangoon, Burma in 1915, during the British Raj. He was a Surati Baniya from Gujarat. In World War II, he left behind a wife and a young daughter. When the family didn’t hear from him a long time, they assumed that he was killed in the war, and she remarried. But he did return to India after winning a Military Cross for bravery at the crossing of the Rivers Senio and Santerno in Italy by the 8 Indian Division during the period 9-11 Apr 1945. He also fought in the Battle of Monte Cassino. He did remarry (Sharda). He later became the military attaché for India in Moscow. In 1963, He was sent on a non-family posting in Kashmir where he was killed at the age of 45. Other details listed on https://www.indianmemoryproject.com/144.The story on this blog is written by his granddaughter about Sharda.