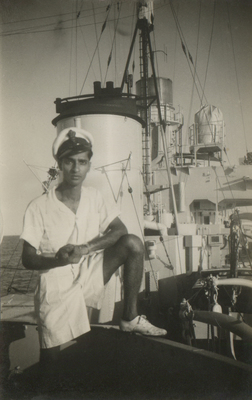 Ordinance Artificer W.R. Srinivasan served in the Royal Indian Navy Service no. 12610 from 23/09/1942 (when he was 24 years old) to 30/11/1947. After independence from Britain, it became the Indian Navy. His time in the navy was a critical period in South Asian history and he spoke about the Navy mutiny against the British during colonial rule. He was an Ordinance Artificer. He served on various ships like HMIS Himalaya, Shamsher and Jamuna, which was the Flagship of the Navy. During World War II, he went to Bahrain, Colombo, Tigris and Euphrates. He also played football for the Naval team and was an advanced yoga practitioner. When he was getting off the ship in Mumbai, he fell into the water when he read the telegram that said that his marriage had been “fixed” or arranged by his parents! Date of birth 15/04/1916. He passed away on 10/05/2016.