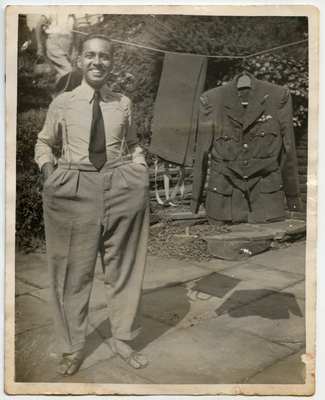 Commissioned in 1942. His family was impoverished. He was one of three boys. One brother became a clerk. A second a teacher. SKR Bhatt attended a government school and his elder brother goaded him to finish. He always had a mechanical bent and he went to Madras to look for a job in 1941. He got a job in watch shop while he also did an Engineering course The British were starting to have emergency commissions. Bhatt joined the Air Force as an airman as they desperately needed pilots. He was selected to go to England to train to fly spitfires and hurricanes. According to his son, in Burma, he targeted ammunition dumps on Japanese boats and once when he struck Japanese boat his wing broke. He managed to land safely with two min petrol/gasoline left. Two days later he contracted malaria and was placed on sick leave. On 31st August, 1945, he had a narrow escape from Japanese soldiers who were still fighting the war despite of it being over. Post Malaria, he joined 8 Sqn Indian Air Force. There is a memorial stone in his name in the RAF association’s “Remember A Hero” section of the National Arboretum, Alrewas, UK.